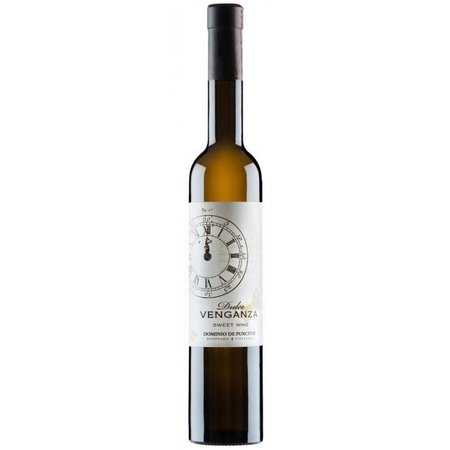 Dominio de Punctum is a young, organic working company in La Mancha, founded in 2005 with the aim of producing wines in a bio-dynamic way. "Organic" means for Dominio de Punctum: absolutely without chemicals. Bio-dynamic working means that you view the vineyard as a large, collaborative eco-system. It is not only vines that live in the vineyard, but also insects, birds, other plants and, in the soil, micro-organisms. They all contribute to the well-being of the vineyard, and thus to the quality of the wine, is the idea.
The nice thing about this domain is the choice of grape varieties: of course Tempranillo has been planted (this is Spain after all), but there are also less expected varieties, which do surprisingly well in La Mancha's continental climate ("nine months winter, three months hell residents say about their climate).
For example, the vineyard Petit Verdot, a grape variety that originally comes from Bordeaux, but has a very marginal existence there. It is a late ripening grape variety that often does not ripen well or at all in Bordeaux. However, it ripens excellently in the warm summers of La Mancha (harvest in September / October, in the cool of the night).
At least as surprising is Viognier, an equally capricious breed that almost died out in the 1960s due to difficult cultivation. A few hectares could still be found in the appellations Condrieu and Château Grillet, both in the northern Rhône valley. However, since then there has been a revaluation of the floral, aromatic wine that the grape produces. After planting in warm areas such as California, Australia and South Africa, the grape was also planted in the warm south of France. From this perspective, planting in La Mancha is an obvious choice, and Viognier grows and matures excellently in the long, warm season, without losing its signature freshness.
http://www.dominiodepunctum.com/
Reviews
No reviews found
Read or write a review
Add your review
© Copyright 2021 Het Wijnportaal Powered by Lightspeed